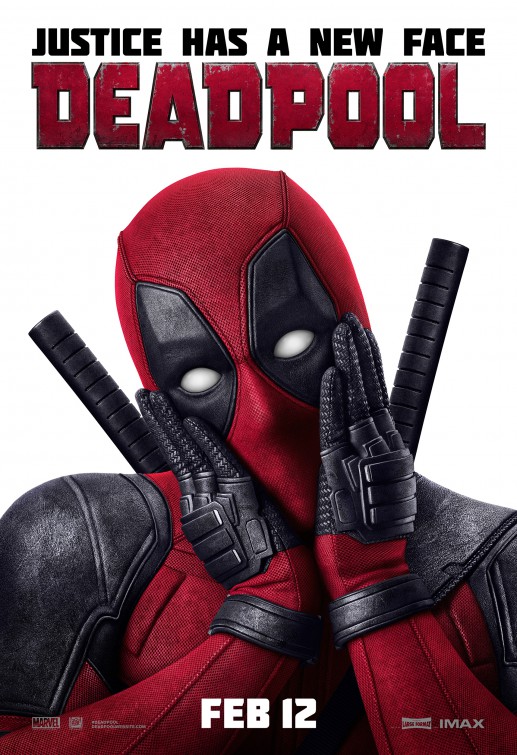 In short:
Deadpool is a highly entertaining film, though most certainly not one for the kids. Ryan Reynolds is convincingly funny in his role as Wade Wilson, although in my opinion Morena Baccarin was simply eye-candy, and I was not convinced of their romantic bond. The unique styling and consistent breaking of the 4th wall to address viewers made Deadpool stand out from the seemingly never-ending stream of superhero movies.

The full story:
To be brutally honest I had never heard of Deadpool as a super hero before the film. I was never into comic books, and was too obsessed with the Spiderman and X-Men cartoons as a child. However, from the very beginning, he seemed like an entertaining character, and one that would most certainly make for a good film. Ryan Reynolds is no new comer to super hero films, having previously starred in the awful Green Lantern (2011) and briefly in X-Men Origins: Wolverine (2009) as the character of Deadpool. He suited the character perfectly, and his one-liners and jokes often provoked genuine, laugh-out-loud kind of laughter. My issue with Deadpool as a film is that unlike other series (The Avengers comes to mind) it does not tie him in with other superheroes. We see only two X-Men: Colossus and Negasonic Teenage Warhead- both by no means X-Men A-listers (although I did always love Colossus due to his Russian origin). This is somewhat a disappointment, as I would have loved the character of Deadpool to meet and make fun of some more of the famous super heroes and mutants of the academy.  However we do get to meet Dopinder (played by Karan Soni)- Deadpool’s often employed taxi driver, paid only through “crisp high fives” and often dangerous advice. He provides an added element of entertainment throughout the film, and is a crucial side character along with Blind Al (played by Leslie Uggams), Wade Wilson’s blind elderly roommate. These unusual characters provided a different platform for some of Deadpool’s more obscure jokes, and made the whole experience of the film a lot more enjoyable.

Overall, I would recommend Deadpool for those looking for some entertainment through super hero style ass-kicking and mature jokes, however it was not one of my favourite super hero movies.

You can find more information about Deadpool the film here, and more about the comic book character here and even more here.