Last Monday I began fermenting my second beer creation, again from a kit. This time it was the American Beers IPA (which you can buy here). In general I love IPA’s and so I am really looking forward to trying this one when it’s finally ready to drink in a couple of week’s time. Just in time for summer to begin rearing its sunny head (hopefully). Decided to brew this one with my girlfriend, and so this batch is officially titled “Dan and Hannah’s Summer IPA”. 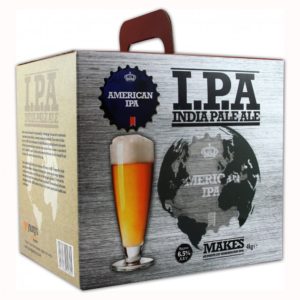 The initial hydrometer reading was quite high (1.057) so I am expecting the beer to be quite strong, at around 6.2% ABV. The kit suggests that the final strength will be around 6.5% ABV, so the initial reading seems to be in the right ball park. I bought a higher quality yeast, however the yeast which came with this kit looked pretty good so I decided to stick to the kit and keep the higher quality pale ale yeast for a later batch. The kit also comes with a hop sachet for dry hopping 2-3 days before the end of the initial fermentation. I will be testing the gravity today and possibly dry hopping today/ tomorrow depending on the reading. This kit is certainly more involved than the last one, which just came with two metal containers of the concentrated malt extract and one sachet of yeast. However, I am itching to get to the next level of home brewing and begin brewing from malt extract, and then later on (possibly by the end of summer) begin brewing all grain. Further down the line I am also hoping to do a bit of DIY and turn a fridge into a kegerator to store all of these brews at perfect temperature.

Will post an update once I keg this bad boy in my newly acquired King Keg!